It was the year 1988 and I was just starting to collect ancient coins. I was in search of my second ancient coin to purchase at a coin show in Long Beach, California. I was seated at the table of an ancient coin dealer looking for my next prize to purchase when a gentleman came up to the table and asked the dealer, "Do you have any coins of Otho?" "Yes", said the dealer as he pulled out a small silver coin out of his case to show to the prospective buyer. "How much? Five hundred. Not bad, it's in nice shape and that Otho he's a tough coin to get and the last of the Twelve Caesars I need." The dealer echoed what the buyer said. "Yep, that Otho, he’s a tough coin!" The prospective buyer said he would think about the dealers offer and possibly return later to buy the coin. I pulled out twenty-five dollars and purchased my second coin. No, not the Otho coin, but a nice Follis of Constantine the Great. As I was walking away with my coin, my mind was racing. Why was this coin of this guy with a name like a mattress so expensive? I had heard of Constantine before and my coin looked to be in better condition, so why was my nicer looking coin of a famous guy cheaper than this obscure emperor? Read on to the end to find out!

Marcus Salvius Otho was born April 28, 32 CE and is presumed to be named after his grandfather who had the exact same name. His grandfather had entered the Senate under Augustus and his father, Lucius Otho was consul in 33 CE. He was a trusted administrator under the emperors Tiberius, Caligula and Claudius. His mother, Albia Terentia, was likely to have been nobly born as well. The cognomen "Otho" is believed to be Etruscan in origin.

The ancient authors Tacitus and Suetonius were less than complementary in their writings of Otho as a youth stating that he was extravagant, wild, vain and effeminate. Although Otho was five years older than Nero, the two became close friends in their youth and some suggest it was due to the similarity of their characters. One thing that Otho was apparently skilled at was flattery, and after Nero’s sudden rise to power, Otho was there to feed the ego of the new young emperor.

The escapades of the roman elites could certainly rival any modern soap operas and one example of this is the love triangle involving Otho, Poppaea and Nero. Sabina Poppaea was said to be a woman of great beauty but little virtue. She was first married to the Praetorian prefect Rufrius Crispinus and had one child by that marriage, but she was said to carry on numerous affairs while married and became involved with Otho. She later left Rufrius Crispinus and then married Otho. Otho supposedly boasted to Nero of Poppaea’s charms and soon Nero became involved with Poppaea which probably resulted in Otho being sent far away to Lusitania in 58 or 59 CE to govern the area, but also conveniently allowed Nero to carry on his affair. In 62 CE, both Nero and Poppaea dissolved their respective marriages and then married each other later that year. The marriage between Nero and Poppaea was to end tragically in 65 CE when Nero kicked the then pregnant Poppaea in a fit of rage resulting in the death of her and the unborn child. Poppea had the distinct honor (or misfortune) of being married to two emperors, although she did not live to see Otho become emperor. Otho did indeed become governor of Lusitania in 58-59 and he assumed the post as a quaestor, a rank below that of praetor or consul, the minimum usually required for the office. Otho was now on a possible path towards the imperial throne.

The Rise and Overthrow of Galba

Nero’s suicide in June 68 marked the end of the Julio-Claudian dynasty and opened up the principate to the prerogatives of the military beyond Rome. First to emerge was Servius Galba, governor of Hispania Tarraconensis, who had been encouraged to revolt by the praetorians and especially by Nymphidius Sabinus, the corrupt and scheming praetorian prefect at Rome. By this time Otho had been in Spain for close to ten years. His record seems to have been a good one, marked by capable administration and an unwillingness to enrich himself at the expense of the province. At the same time, perhaps seeing this as his best chance to improve his own circumstances, he supported the insurrection as vigorously as possible, even sending Galba all of his gold and his best table servants. At the same time, he made it a point to win the favor of every soldier he came in contact with, most notably the members of the praetorian guard who had come to Spain to accompany Galba to Rome. Galba set out from Spain in July, formally assuming the emperorship shortly thereafter. Otho accompanied him on the journey.

Galba had been in Rome little more than two months when in early January of 69 the troops in Upper Germany refused to declare allegiance to him and instead followed the men stationed in Lower Germany in proclaiming their commander, Aulus Vitellius, as the new ruler. To show that he was still in charge Galba adopted his own successor, Lucius Calpurnius Piso Frugi Licinianus, an aristocrat completely without administrative or military experience and a ridiculously long name! Galba was seventy-two years old at this time, and his successor would probably be named emperor in a fairly short period. Galba’s choice of successor particularly angered Otho, who had hoped to succeed Galba with his experience and show of support. Otho quickly organized a conspiracy among the praetorians with promise of a material reward (supposedly 15,000 denarii to each of twelve key men of the praetorian guard), and in mid January 69 they declared Otho emperor and ambushed and murdered the feeble emperor Galba who they were supposed to protect. Piso was dragged from hiding in the temple of Vesta, and also butchered. On that same evening a powerless Senate awarded Otho the imperial titles. Otho was the first emperor that openly attained his office through the murder of his predecessor. 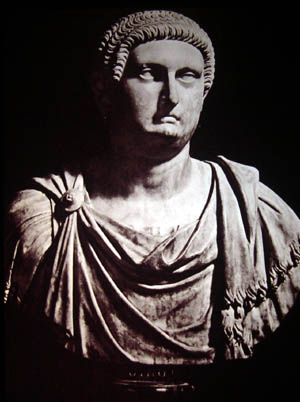 Otho held the title of princeps for a brief eight and a half weeks in Rome from January-March in the chaotic year of 69 CE. Galba’s quick demise had surely impressed upon Otho the need to conciliate various groups. As a result, he continued his indulgence of the Praetorian Guard but he also tried to win over the Senate by following a strict constitutionalist line and by generally keeping the designations for the consulship made by Nero and Galba. In the provinces, there are some indications that he tried to compensate for Galba's stinginess by being more generous with grants of citizenship. In short, Otho was eager not to offend anyone. Otho appeared to have support in the provinces to the east and south, especially, the holy land and Asia Minor where coins were issued in his name. Problems remained, however. The praetorians had to be continually placated and they were always suspicious of the Senate. On the other hand, the Senate itself, along with the people, remained deeply disturbed at the manner of Otho's coming to power and his willingness to be associated with Nero.

While Otho was consolidating his power in Rome, his power would soon be challenged by Vitellius' legions in Gaul and Germany that were advancing for confrontation in Italy. One of the main problems facing Otho was many of the legions loyal to him were far away in areas such as Pannonia, Dalmatia, and Moesia. Before Otho had received the full strength of his Danubian legions he unwisely decided to force a battle at Bedriacum on April 14th in which his armies were soundly defeated. Neither Otho or Vitellius were at the battle scene, but Otho apparently realized that a new round of fighting would have involved a significant re-grouping of his existing troops and potentially engender bloody civil war at Rome, and that enough blood had been shed. (It was estimated that up to 40,000 soldiers died at Bedriacum). Two weeks shy of his thirty-seventh birthday, on April 16, 69 CE Otho took his own life.

During one of the most chaotic years in Roman history, 69 CE - the so called "year of four emperors", Marcus Salvius Otho was the second emperor of the four to come to power. Of the twelve Caesars his reign was the briefest, (only 95 days) and his reign ranks as one of the briefest in the history of the Roman Empire. Contributing to the instability of this period, were such factors as an unclear method of imperial succession, a weak Senate, and a Praetorian Guard and legions willing to sell their support to the highest bidder.

After reading the history of Otho’s very short career as emperor, you have probably also realized that he didn’t have very long to put his handsome mug on coins. Therefore, his coins are the rarest of the Twelve Caesars, so plan on some significant spending when purchasing an Otho coin. As a general rule, those emperors that were not politically savvy to stay around very long also did not get to make many coins; therefore emperors like Otho, Balbinus and Pertinax tend to get pricey since many collectors are trying to get a coin of each emperor. You should be aware that the Roman imperial coin issues of Otho were not minted in bronze, so if somebody tries to sell you an Otho sestertius keep walking. Also, be aware that Paduan and other type of bronze fantasy pieces of Otho exist.

A few interesting points worth mentioning: Otho was not only a member of the hair club for men, he was a founding father! Even back in Roman times, rich guys had wigs, toupees, rugs, whatever you like to call them.  On imperial coins (silver denarii and gold aureii from Rome) Otho is always shown with his lovely wig but never wearing a laurel wreath as most emperors were portrayed. If you look at examples of coins with lots of hair detail you will notice his hair looks very different from the other emperors. This is a helpful method for identification.

Provincial and Other Coinage

The story is different with Roman provincial coins, where the major eastern mints of Antioch and Alexandria minted silver and base metal coins of Otho. These issues almost always show Otho with a wreath on his head. The bronze issues usually run 20-28 mm (Æ 20-28) in size and are often the least expensive of Otho’s issues, but still not necessarily cheap. Another scarce but interesting coin to consider is that of Poppaea, the wife of both Otho and Nero. This is also a coin that is uncommon and usually fairly expensive. Happy collecting!